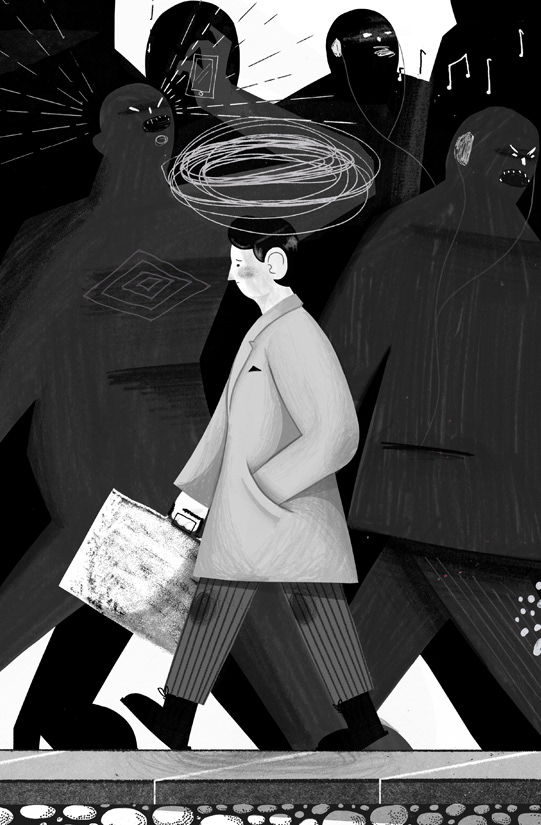 By Sabrina Mei and Mary Ma

I sit in my seat, surrounded by three people I don’t know, palms sweaty as the teacher facilitating our community discussion asks us to talk about some of the mental health struggles we face as teenagers. Visibly uncomfortable, the girl across from me makes a sarcastic quip about the scenario, about how she’d much rather get a free period to just relax. We both laugh and I jokingly agree. But there’s a truth to what she said. The presentation given was impersonal and cold, providing no clear answers, no warning signs, no information about crisis control. Our school is afraid of cutting to the chase, of truly asking what we, as a student body, need.

Almost every student that I interviewed said that they thought the greatest source of stress in their life was academics.

Almost every student that I interviewed said that they thought the greatest source of stress in their life was academics. The never-ending loads of assignments, the impending doom of college applications, the pressure of excelling in schools and extra curriculars, the unsettling anxiety of assessments, teachers and administrators don’t seem to understand the constant pressure that students are under in school. In an attempt to be more proactive, RM had asked us what we thought the most important topics of conversation should be brought up in discussion, and we said gun control, race and mental health. After these discussions, MCPS may think that their involvement in this issue is done, and that their solution is sufficient, but mental health is still a daily challenge to many youths, and will continue to be if schools continue to be reactionary and don’t take initiative.

I don’t know how many times I’ve listened to a friend say “I literally want to kill myself.” Sentiments of depression and suicide seem to be inherently linked to school. The internet has popularized self-deprecating and dark humor, and these sayings are taken as such, hiding the increasing amount of mental health issues that each student deals with. It’s a self defense mechanism, a way to hide depression, to turn it into humor, into sarcasm, but the underlying truth is that the students are not okay, and these “community discussions” are only a band-aid on a much deeper wound.

So what prompted these community discussions? In 2017, our county saw at least 5 teen suicides. When these happened, students and parents were baffled. Why was there a surge? Why did it happen? How could something like this happen in a community as sheltered and suburban as ours? Students started to post hearts on social media. For a few weeks, Instagram and Snapchat were flooded with different colored hearts for each incident. But pretty soon, people started to forget.

It is this tendency to forget that, in the end, hurts us the most. We see these tragedies in news headlines, and while we may feel sympathy for the two minutes that we spend reading through the article, there is an inherent divide that exists when approaching this topic. No one likes to immerse themselves in the reality of the issue, so rather than accepting its weight, we treat it as something separate, something that isn’t our problem. Yet, this mentality is wrong, and it is only becoming increasingly apparent that the issue of mental health among youths is our problem.

We flare up for a few months, posting hearts and condolences, offering our support over the cold front of social media, but none of us choose to take initiative.

10.7% of young people in the US, ages 12 to 17, have experienced a major depressive episode, which amounts to approximately 8,659 youth in Montgomery County. 30% of students in Maryland reported experiencing symptoms of depression. 13% reported at least one major depressive episode, and 17% reported seriously considering suicide. These statistics are terrible, but what may be even more startling is how numb we have become to these reports. Even when suicides occur in our community, we eventually brush them off. We flare up for a few months, posting hearts and condolences, offering our support over the cold front of social media, but none of us choose to take initiative. After a few heartfelt Instagram posts, we remain unchanged, while the family members of the victims are left to grieve.

Ever since the surge of suicides, the Board of Education has been continuously adopting mental health as a major concern in their yearly legislative agenda, often speaking of making counselors and psychologists more accessible, and resources more available to students. Yet we still haven’t seen much change. Counselors are overloaded with college recommendations and schedule changes from hundreds and hundreds of students, psychologists are almost nonexistent, and resources are not passed out. Suicides and self harm may not get as much press coverage as in 2017, but these incidents have not stopped. High school is confusing. Teens are especially vulnerable to mental illnesses with pressure from school, friends and family, while trying to figure out their own identity. The statistics show that we need to step it up.

In order to truly create change in how our system chooses to deal with mental health, we have to increase our own awareness and realize that we are the key to change. The members of the Board of Education don’t go to school. We are the only ones with experience, we are the only ones that know. Go to community Board of Education meetings, talk to the SMOB, sign petitions (such as the one I linked below). Make your voice heard!